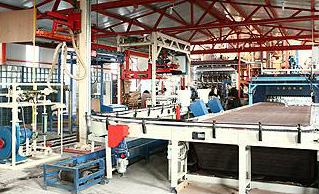 Though Armenian Glass making traditions and achievements started to develop in the midst of 20th century, they had unprecedented success starting from 1989 by following worldwide glass production major principles, discovering at the beginning of 20th century. The first plant of “Saranist” company was built this year in Kotayk region of RA.

In 1990, after completion of construction works, container glassware production started and from the very first days the production was highly valued by consumers both in Armenia and abroad.

In 1997 the second workshop was built with bigger furnace and more glass forming lines.

In 2004 “Saranist” composed fruitful achievements and put the base for new phase of development by establishing “Arm-Glass” company and by building a modern factory.
2005 is the continuation and enforcement of this new phase. This year the company exploited another new modern production line and excelled its possibilities of market supply.
Then no any year Saranist has passed without new investments, modernization and something new.

2010 year going to be another famous year, as company will declare about third furnace and third factory at the October month.

Today the company is honored to have many consumers, who made their brands with the nice bottles produced by Saranist. Some of them are Avshar, Vedi-Alco, Noy, Kotayk, Gyumri, Proshyan, Armenia Wine, Yan and others